Biodiversity in the Dene 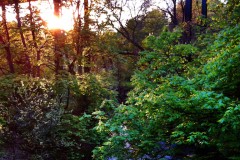 Following today’s AGM of the Friends of Jesmond Dene, Ouseburn Parks ranger Michael Woodcock gave a fascinating talk about the flora and fauna of Jesmond Dene, and the wildlife corridors spreading from the Tyne to Gosforth Park and beyond. He showed photos of some of the 150 species of moths found in the Dene as well as pix of the many and varied types of fungi that can be seen in what are 8000-year old woodlands, he said.

The huge range of flora and fauna in the Dene is due to the age of the woodlands. And the water in the Ouseburn is clean enough to support dippers, a species of bird more normally to be found by fast-flowing streams in upland areas.

The larger animals in the Dene include foxes and otters, and birds include kingfishers, sparrow hawks and owls.

Michael places his videos on YouTube under the name of OuseburnParksRanger. Here’s a selection of his films to date. He showed one to the AGM audience that won’t be on YouTube for some weeks; when it does go live you’ll understand why it was kept under wraps. Watch this space for news!

Insects found in the Dene: