SOS: Save Our Squirrels (and badgers, and roe deer, and bats, and buzzards). Object to these greenbelt building plans online, by email or by post; and come along to meetings to show you’re on the side of the Natural History Society of Northumbria and the Northumberland Wildlife Trust. 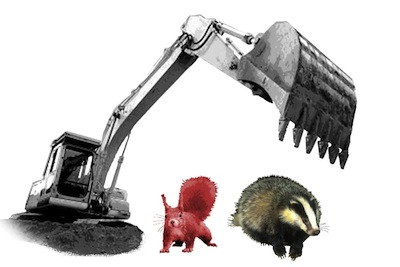 Newcastle City Council is proposing to allow the building of 8,000 new homes on Tyneside land designated as Green Belt, including 600 new homes in the fields next to Gosforth Park Nature Reserve. If the ‘Salter’s Lane Neighbourhood Growth Area’ gets the go-ahead, a crucial wildlife corridor will be destroyed. This will impact on animals in the Gosforth Park Nature Reserve but also in Jesmond Dene.

The plans – contained in Newcastle City Council’s One Core Strategy – are opposed by the Natural History Society of Northumbria and Northumberland Wildlife Trust.

The council’s Strategic Land Review says Green Belt land is important but then illustrates how this Green Belt land will be built upon by developers. Brownfield sites are also considered for development by the council but many potential plots are “complex” (translation: expensive for developers to put right; pristine Green Belt land may be precious but it isn’t complex so is cheaper to develop and will result in fatter profits for house builders).

The Salter’s Lane Neighbourhood Growth Area contains fields that provide essential foraging habitat for wildlife that lives in the nature reserve. Without this habitat this wildlife will be lost forever. This includes families of badgers and roe deer, brown hare, several species of bats and birds such as barn owl, kestrel, and buzzard. Other wildlife in the reserve that would be badly affected by this development includes otters, red squirrels, voles, shrews and small birds. The area is also attractive and peaceful countryside that is well used and loved by local walkers, nature enthusiasts, dog walkers and cyclists.

Ten years ago Newcastle Council designated this area as a Strategic Wildlife Corridor linking Jesmond Dene to the wider countryside.

However, the Government’s new, streamlined planning guidance it will become easier for developers to ride roughshod over the views of local residents.

As environmental campaigner George Monbiot says, the new planning guidance may say it “puts local people in the driving seat of decision making in the planning system” and that “communities will have the power to decide the areas they wish to see developed and those to be protected,” but in reality this won’t be the case.

“It is true that local people, through neighbourhood development orders and community right-to-build orders, will be able to grant planning permission for development that is not envisaged in the council’s local plan. But they’ve been given no powers to prevent development that is contained in the plan – or even development that isn’t. The framework’s new presumption in favour of sustainable development – by which the government means all development except coal-mining – will make it almost impossible to resist a developer’s proposal. It takes a system that is already unfair, unbalanced and undemocratic and makes it even worse.”

Newcastle City Council is consulting people on their views of the plans for Salter’s Lane Neighbourhood Growth Area. We have until 18th November to tell the council what we think.

You can stop the destruction of our wildlife and countryside by telling the Council that you object to their plans. The more people who object the better the chance we have to stop this terrible proposal and to save our wildlife and open spaces for future generations.

To demonstrate opposition there’s to be a public walk-about of the area at 11am on Sunday 30th October (meet at the entrance to the nature reserve) and there will be a public meeting with Newcastle planners held at Gosforth Civic Hall, 7pm on Tuesday 15th November.