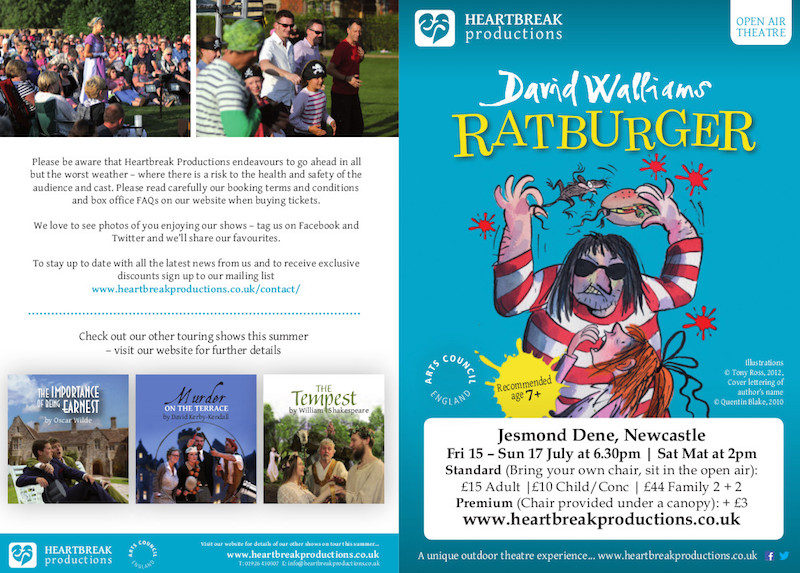 Later this year Heartbreak Productions will mount the first stage adaptation of Ratburger, a novel by comedian David Walliams. The play will visit Jesmond Dene over the weekend of 15th–17th July.

Ratburger tells the story of a young girl desperate to break away from her horrible mother, and set upon by a sinister neighbour who is determined to have her pet rat for his burger-shop.

“We are thrilled that David Walliams has agreed for us to tour the theatrical premiere of “Ratburger” for 2016; it’s a fitting tribute to celebrate the 25th anniversary of Heartbreak’s and we hope that first time audiences from “Mr Stink” will return for another exhilarating experience of Walliams’ mischievous humour and uplifting storytelling.”

Heartbreak will also tour with Oscar Wilde’s The Importance of Being Earnest, Shakespeare’s The Tempest, and Murder on the Terrace, an interactive murder mystery. Do not expect traditional staging of these classics, however, as Heartbreak’s signature style is to frame traditional pieces in alternative settings. The Tempest, for example, will be set at a pagan stone circle, and performed by modern-day druids, connecting Britain’s ancient traditions with the themes of the play. The Importance will be moved forward to the eve of the Great Depression, highlighting Wilde’s social satire by juxtaposing the trivialities rendered significant with the significant reduced to the trivial. Murder on the Terrace is an original work written by Heartbreak stalwart David Kendall-Kirby. It is an interactive murder mystery, perfect for light-hearted summer evening entertainment.

In a bid to make the production more accessible to all, Heartbreak Productions are providing a BSL interpreter for the Saturday matinee performance on 16th July at 2pm.